Just heard Umpqua College in Roseburg shooting. Anyone else confirm this?

--snipped--
/QUOTE]
Educational sanctuary has become synonymous with fish in a barrel. No immediate means of self defense. :banghead:
Click to expand...

All the talking head experts yapping about campus safety, but not one word about students should be allowed to carry.

One grandparent of a student who also use to work there said that it was a gun free zone and she couldn't understand how this could have happened...:uhoh:
Last edited: Oct 1, 2015 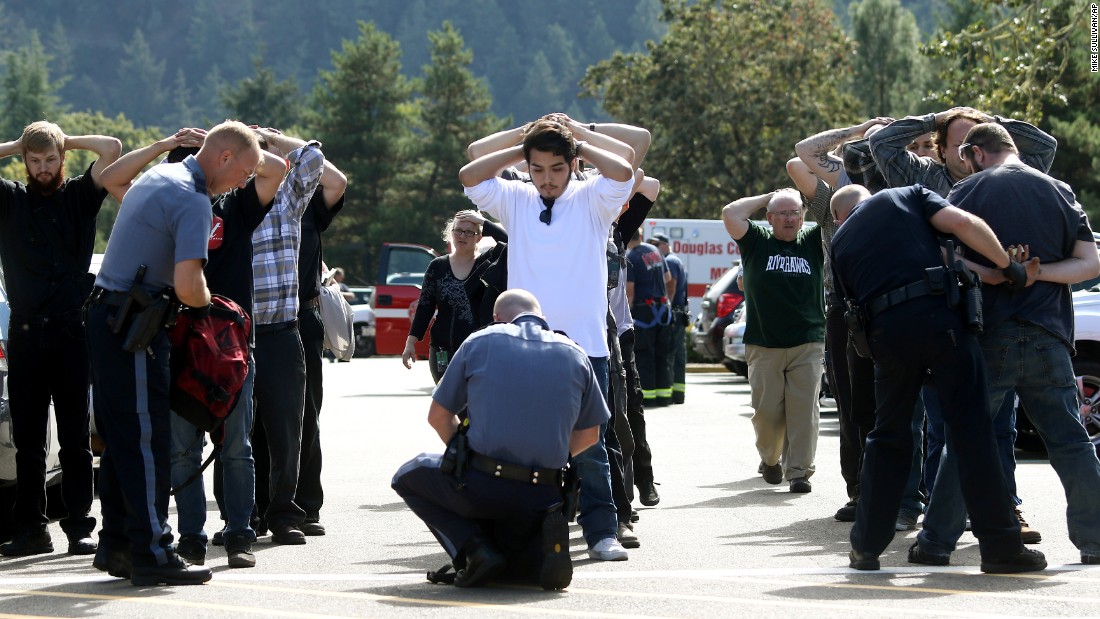 The reports say that the police are seeking a warrant to search the shooters house.

My question is where is the warrant to search the students backpacks......

nothing in the least confrontational of the wrists bent backwards of the young man on the right by the nice LE searching the young man's pockets.

yes, yes, yes...i know the nice LEs need to assure the one in custody doesn't or didn't or whatever the thought process being currently implemented have an accomplice ..but

out LEs have not mastered the psychological profiling employed by other LE entities in foreign lands...

In an Oregon Court of Appeals case (2011), three judges concluded that Oregon public colleges and universities no longer have authority to ban weapons on the physical grounds of a campus. Each school does however, have discretion as to whether to permit concealed handguns inside buildings, dormitories, event centers, and classrooms. Private colleges and universities may still prohibit weapons throughout the entire campus including grounds.

On March, 2, 2012, the Oregon Higher Education Board voted unanimously to ban weapons in all seven state colleges and universities.

So, while someone can technically carry a gun legally onto the campus of public colleges in Oregon, anyone attending classes is effectively disarmed from the last location they can store their firearms. At best, this would be inside their car in a parking lot somewhere on campus. Most likely, most often, I would expect that most everyone attending classes is going to be disarmed from the moment they leave home...assuming "home" is something private and off campus, rather than a dormitory.

In other words, for all intents and purposes, Oregon colleges are all defenseless victim zones.

But the problem is caused by where and how the murderer (notice how the media calls them a "shooter" when they use a gun, rarely are they called a "pugilist" if they use their fists, or a "stabber" if they use a knife) got his guns, not that his victims were all fish in a barrel.

of things i find it interesting...
when i first heard about this event right after it was broadcast my ping on the local news report stated the perpetrator was in 'custody' yet when i turned the news on a few minutes ago...perpetrator was dead or as the sheriff stated at a news conference: male shooter had been "neutralized" and was dead after an exchange of gunfire with responding officers.

and the records will be sealed forever...

A person that has no ties to the public college can carry a firearm on campus (public buildings require a CHL), but guaranteed that they would try to say you are "disrupting" the college learning experiance and go for a trespassing charge (shouldn't hold up in court, but who wants to go though the system... time & money).

Note: this community college has a higher average age (like 30ish) and you have to be 21 to get a CHL.
Sad that these rules keep CHL holding students / staff from carrying, they might have had someone (especially former military) who could have responded sooner and kept the body count lower.

Expect the Oregon legislature and anti-gunners to push for more restrictive laws no matter if they would have any effect on this or other shootings.
Last edited: Oct 1, 2015

Side question, under what authority can law enforcement require the backpack/bag search (and apparently person search) of everyone on the campus? Looks like a mass violation of the 4th amendment (unless the person voluntarily submits).

Lord Sega said:
Side question, under what authority can law enforcement require the backpack/bag search (and apparently person search) of everyone on the campus? Looks like a mass violation of the 4th amendment (unless the person voluntarily submits).
Click to expand...

I am not a lawyer and please do not take my response as any kind of agreement with what the police are doing.

But, to answer your question as best I can, my guess would be that the police would appeal to the "exigent circumstance" doctrine. This is what allows them to kick in a door without a warrant when they hear someone screaming for help from inside.

Notice that the constitution prohibits "unreasonable" search and seizure. Warrants are issued pursuant to sworn testimony and other restrictions. But the courts have held (for better or worse) that certain searches and seizures are "reasonable" even in the absence of a warrant.

With several dead bodies in a confined area I expect the courts would uphold the power of police to do a quick search of persons and effects in the area in the interest of immediate public safety against a 2nd potential shooter (or even the 1st until he is in custody).

Again, I'm not saying I agree this is right, it is just my best understanding of the way it is.

Lord Sega said:
Side question, under what authority can law enforcement require the backpack/bag search (and apparently person search) of everyone on the campus? Looks like a mass violation of the 4th amendment (unless the person voluntarily submits).

Terry v. Ohio
Cops can only do a pat-down for weapons. For a search cops need a warrant.

color of law said:
Terry v. Ohio
Cops can only do a pat-down for weapons. For a search cops need a warrant.
Click to expand...

so color a query...based on your understanding, does terry permit the wrist twisting showing in the earlier foto or is that a officer safety mentality? especially since it seems the students are compliant...

solus said:
so color a query...based on your understanding, does terry permit the wrist twisting showing in the earlier foto or is that a officer safety mentality? especially since it seems the students are compliant...

That falls into one of those exception categories that the USSC has not defined yet.

solus said:
so color a query...based on your understanding, does terry permit the wrist twisting showing in the earlier foto or is that a officer safety mentality? especially since it seems the students are compliant...

The debail is in the details.
S

Thank you for the information.

I guess the intent is to protect against unlawful searches, not to make it needlessly difficult to prosecute crimes, so this makes sense.

On the flip side, what good is the requirement for warrants to describe the particular place to be searched and items for which the search is conducted, if anything found can then be used? It would seem, based on what you've posted, that once a valid warrant is issued, any evidence, of any crime, discovered during the lawful search is fair game even if the item described in the warrant is never found. Seems kind of a big and dangerous loophole.

Or have I missed something.

Could result in nerve damage.

I hope it results in a massive lawsuit.

color of law said:
That falls into one of those exception categories that the USSC has not defined yet.
Click to expand...

I just want to add some new information/understanding to what has been posted so far regarding the gun-free zone status of Umpqua Community College. Here goes (from another blogger replying to a post I made on another site):

"The 7 schools covered in that 2012 ban (on prohibiting concealed carry on campus) were all the public, 4-year universities in the state, which means UCC (Umpqua Community College) was not part of that ban since it's a 2-year community college. The community colleges in the state were able to make their own rules based on that 2011 (a previous Oregon Supreme Court) ruling and most (if not all) have gone with not allowing guns in any campus buildings." (my edits in parenthesis for clarity)

So if the above is true, then we have a TOTAL gun ban on the Umpqua campus, not just inside the buildings. This is consistent with the published Umpqua security policy that outlines their status as a weapons-free institution (screen grabs of this policy are available on the net - the relevant school web page was down/unavailable last time I checked).

Also, all Umpqua's security guards were unarmed (according to the college president).

Umpqua's gun-free zone status is important, because I've been to a lot of anti-gun leaning sites/blogs today and have noticed a great many misleadng posts stating that Umpqua was not a gun-free zone and therefore the pro-gun argument that guns save lives or at least deter these mass murders is false. They are misunderstanding Oregon law or deliberately fibbing. It is up to us to set the record straight!
Last edited: Oct 2, 2015
You must log in or register to reply here.
Share:
Facebook Twitter Reddit Pinterest Tumblr WhatsApp Email Share Link
Top